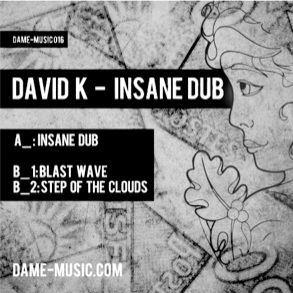 After a well noticed appearance on the Dame-Music 015 “Klub Klub Elite Vol.2” with the track “DAM’ Beat for Klub” David K is back on Bloody Mary’s imprint for his own solo Ep.

“Insane Dub” Ep unveil a three tracks single from David K’s best rhythm and sounds exclusively to Dame-Music. The man and the machines have done the work. Following his huge success on “Rue De La Plaisance” and not to forget his touch on Visionquest “Fall Winter Collection” David has also produced music for labels such as Freak’n’Chic, Tsuba and the disreputable and widely known Cocoon.

The title track, “Insane Dub”, is introducing itself with a classic four by four drums ensemble spiced up by a quirky sound that may be interpreted as a felt pen on a slate board. Around a minute a smooth bass start progressively whispering in your ears to the first break. This is when the insanity begins. Notes are shortened, the lead synth make its entrance in unison with the bass and the game is on.

On the B-side “Blast Wave” is a sequence of trippy melodies held by african vocals and percussion overflown by cutting-edge pads and founded on a rolling bass. Then, among ghostly sough and percussive melody “Step Of The Clouds” progress on a bed of muffled drums and spooky strings waves.